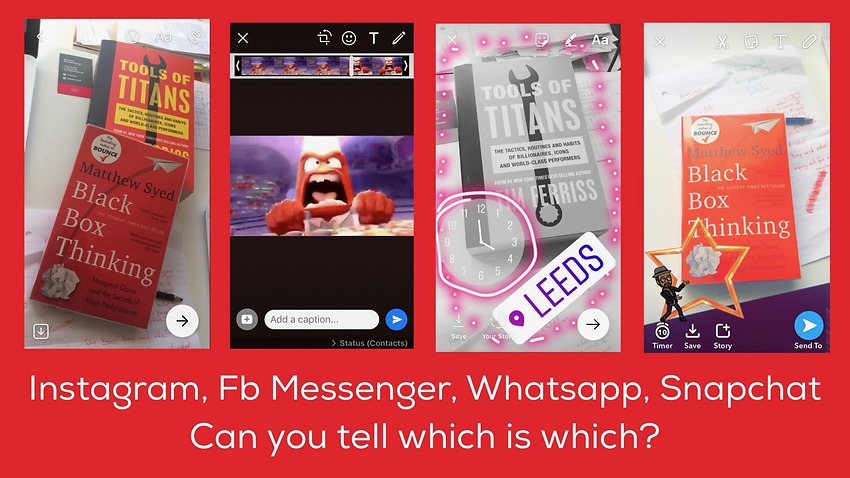 So the cat is out of the bag!  Snapchat may have won the battle of storytelling formats but Mark Zuckerberg is determined to win the war of execution.

Snapchat vs Zuckerberg
In case you haven’t been keeping tabs on this story it goes something like this; in 2013 Zuckerberg offered to buy Snapchat for an estimated $3 Billion. Evan Spiegal, the founder of Snapchat, declined the offer and focused his attention on continuing to build the Snapchats millennial user base.  Not one to be deterred Zuckerberg kept a close eye on the growth of Snapchat which by 2016 had reached 150 million daily active users. It was clear that Snapchat was only going to get bigger and represented a threat to the dominance of Zuckerberg’s digital empire; he didn’t have sole access to millennials.  Something clearly needed to be done…

If you can’t buy them, copy them
They do say that imitation is the sincerest form of flattery.  Well if thats the case then Snapchat’s founder will be feeling pretty good about himself at the moment. Or perhaps not.  Over the last 6 months Zuckerberg has rapidly incorporated the 'Snapchat Stories’ format - a vertical chronological timeline of images and video that last 24h - verbatim into every social platform he owns. So Instagram was given ‘Instagram Stories’, WhatsApp now has the ‘Status’ feature and Messenger has, well, ‘Messenger Day’.  All completely ape the format of Snapchat Stories. Zuckerberg’s aggressive tactics are a HUGE validation for the format that Snapchat invented; on-demand storytelling.

What does this mean for you?
If you are someone interested in better communicating and connecting with people then listen up; on-demand storytelling and live video are going to absolutely dominate the way we interact with each other.  Why? Because authentic, brief, timely storytelling trumps all else.  Think about it; would you rather see a story unfold close up as if you were there or receive a curated story from a distance? Theres no comparison.  Engaging real-time storytelling (or 'on-demand' whichever expression you prefer) on a regular basis enables your network to build a relationship with you in a similar way people do face-to-face; slowly but surely you get to know more about each other and decide if the relationship has a future.

The 'connection economy' works!
It use to be the case that building a product or service that was successful meant having access to peoples attention. And in a world that had a limited number of ‘channels’ this is pretty straight fwd but also expensive.  but that was 20 years ago.  Now the channels - social media - are unlimited and with that come choice.  Ams yourself this; how do you decide what to watch or follow on social media?  I’m pretty sure that you only take notice of things that means something to you, that share your values.  If that the case then its no longer just attention we seek but meaningful attention; people who actually care about us!

Bad news and good news!
The bad news is that with a ever increasing options come ever increasing fracture of attention. It just becomes so much more difficult to build those relationships online.  The good news is that if you have something interesting and valuable to say and can do it creatively and regularly then over the course of time you are guaranteed to build a community around your product, service or message.  Its simply the law of attraction at work.

Coming back to Snapchat and Facebook
Zuckerberg has admitted this through his actions that someone else produced a storytelling format that he couldn’t rival.  Its an interested battle that is fun to watch but even better is the fact that we will all benefit from this competition. Actually we already have as at this moment in time it has never been easier to tell a story as the functionality is now in-built in Fb, Insta, Whatsapp and Snapchat.

The question really is; what is you story?  And are you ready to tell it?

Thanks for taking the time to read/watch/listen.  Feel free to reach out on any of the social channels below to carry on the video format conversation.